In which I remind me and you about being ‘enough’ and ‘worth it’! Imposter Syndrome sneaks up on me in London…

My knight in shining armour

I had a little trip this weekend to a party in that London!
Twenty years ago, whilst working in Kuala Lumpur (I know! Get me!) I went to a bar near my hotel and made friends with a lovely local chap called Alex. He felt that being a lone woman in a strange place, I might be in need of a protector, and although I would have been fine, it was much more fun to chat to him and his two friends.

We spent quite a bit of my free time shopping and chatting together during that trip and it turned a potentially home-sick experience into more of a working holiday.

We have remained friends ever since, and you know that situation where you don’t see each other for years but the connection is still strong and you finally meet again and it feels like always did, or even better? Yes, that.

Fast forward 20 years and Alex is now a UK resident and lives in that London. I’ve not seen him in person for over ten years. So when he was throwing a party for his 40th birthday, I wanted to be there.

What I didn’t realise til just before I got my train tickets, was where the party would be. Then, when we actually arrived on Saturday night, my mouth dropped open because it was even more amazing in real life. Despite being covered in scaffolding for renovation, we were walking in to the Waldorf Hotel, Covent Garden.

I have a guilty pleasure I need to confess. I LOVE telly programmes that go behind the scenes at posh hotels. In fact, it’s one of my most favourite viewing pleasures.
Alex had booked ‘The Executive Boardroom’ for his intimate party for his favourite people. It is a oak panelled room with oil paintings and grand fireplaces. It was beautifully lit and there were beautiful canapes with exquisite decoration and the staff were so attentive and friendly, we felt like rock stars.

You can tell a place by its loos

Don’t you think? Not just the cleanliness but the grand ornate mirrors, the style of towel and quality of the soap. And whether there’s hand lotion too, lol.
The loos at the Waldorf, let me tell you, are gorgeous. On the way back I poked my head in to other bars, restaurants and the famous ‘Palm Court’. It’s the last remaining Palm Court in the world and still used for tea dances, weddings and other fab occasions. 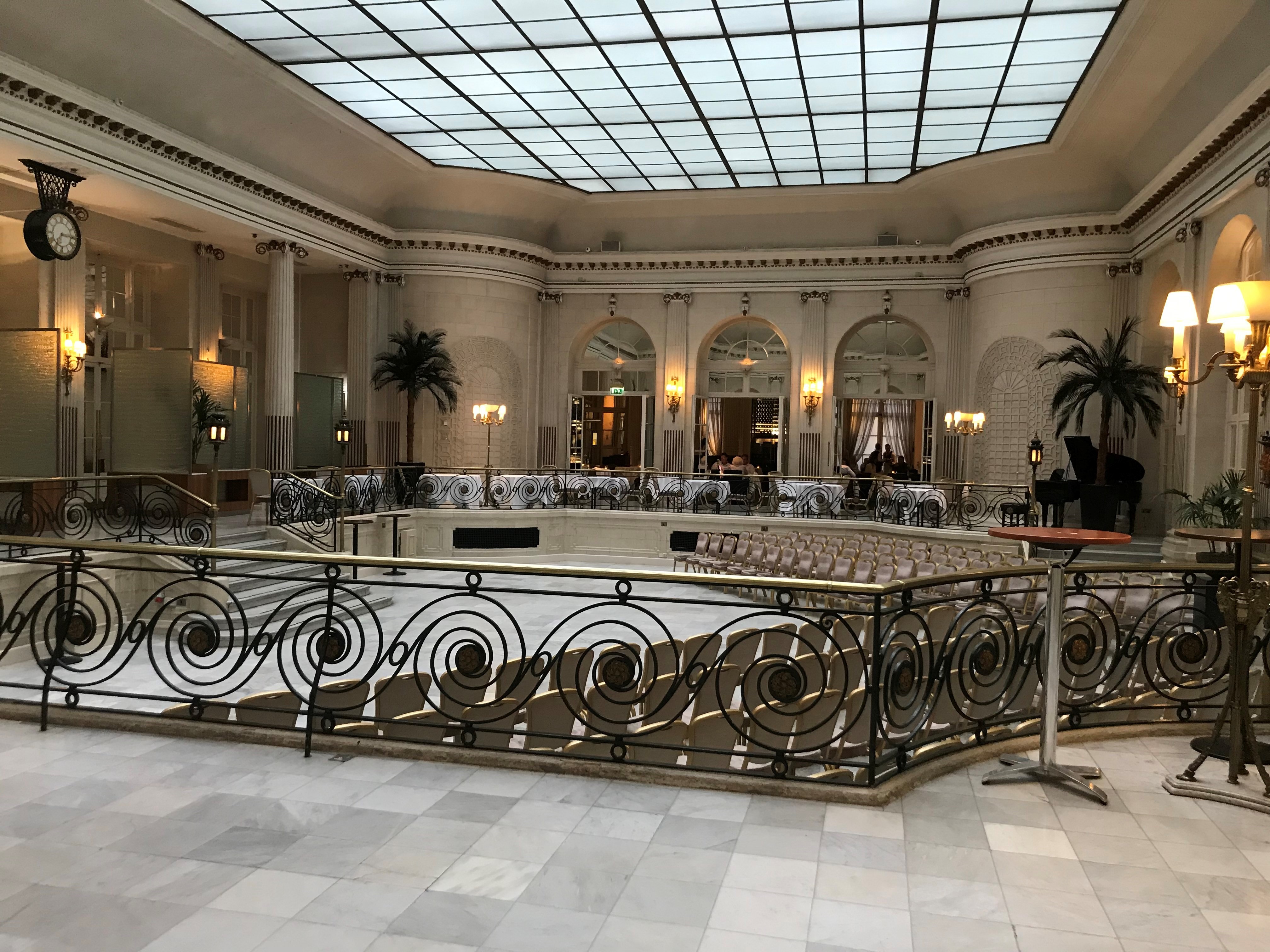 A moment of doubt

And then I noticed I had a sense of feeling out of place. I felt a frantic need to to capture the place in photos, stow branded serviettes into my bag and generally try to squeeze as much out of this experience as possible. It was as if I thought I’d never have this chance again.
And that I didn’t belong there, it being so posh an’ all.

The Waldorf Hotel is situated directly in between two West End theatres. It’s also frequented by many overseas visitors, looking for that British experience they’ve seen on Downton Abbey.
It struck me that the whole thing; the attentive staff, the branded napkins, the brass, the oak, the toilets and the flowers on the food…it’s all theatre. For our delight and delectation. For our entertainment and to give us a stage on which to mark occasions of importance to us.

Did you already know?

You may have always known this. But for me, a light bulb went on.
Whenever my mum is in an expensive place she muses on the occupations and incomes of the other people there, imagining them to all be wealthy and that they ‘do this kind of thing’ all the time without blinking. I’m not so sure. I think most of those restaurants, bars, shops and hotels are full of ordinary people who wanted to do something special. They’ve saved up especially, or will be paying off their credit card afterwards!
They’re not everyday places for anyone, except the odd eccentric millionaire perhaps.
Whether it’s a diamond shop or a cocktail bar, these places are theatres that put on a show to give us a sense of wonder and to allow our precious moments to be played out in grand style. They are places that give an impressive backdrop to our memories.

Enjoy your place in the world

So here’s the thing…this principle applies to life in general, not just the Waldorfs of this world. Any time you’re feeling a little out of place, remember it’s all just theatre. Whether it’s the pomp of a wedding ceremony, the pressure of a meeting at work, the grandeur of a restaurant or just someone’s overly formal behaviour, it’s just giving us a sense of occasion.
And you ARE in the right place.
You DO deserve to be there.
You ARE worth it.
Don’t let the drama llama steal your enjoyment, not for one moment.

Alex had a wonderful party, and so did every one else there, including the staff!
We relaxed into the luxury and we played, and we enjoyed the playing, because, hey, all the world’s a stage and we’re all merely players – as Victoria Wood may have said.

Have a great week, not taking things too seriously,
I’ll be over here drinking water, I’ve got some re-hydration to be getting on with 😉